Be careful, enabling following options may increase decryption time significantly!
Include following character sets for creating combinations;
Max length of text to be decrypted: 6
SHA224 is a hashing algorithm. There is no direct method for SHA224 decryption. SHA224 is decrypted by using Trial & Error methodology. It may take some time if either the text that will be decrypted or the character set that will be used for decryption is long.

What is Online SHA224 Encrypt/Decrypt?

SHA224 Encrypt/Decrypt is a free online tool for generating SHA224 hashes from strings and decrypting SHA224 hashes to strings. In other words, this tool is a combination of SHA224 hash generator and SHA224 decrypter. SHA224 is a hashing function that creates a unique 224-bit hash with 56 characters long for every string. Even though SHA256 and SHA512 are more common hashing algorithms, SHA224 is still used as an alternative.

SHA224 is almost identical with SHA256 in terms of generating the hash value. The main differences are h0 to h7 initial hashes that used in the generation function are different. Also, h7 is omitted in the output of SHA224 hash which results in a 56 characters long hash rather than 64 characters long one. In 2004, SHA224 is published as an alternative to SHA256 which was published in 2001. If you store your data as hashes, SHA224 will take less space than SHA256, but it has still good resistance to collusion attacks. If the number of data you stored is huge, this can make a difference. Other than that, it matches security strength of Triple DES (or 3DES) which is a block cipher.

Like all other hash functions, SHA224 is a one-way function. That means you can encrypt a string and get a hash value, but you can't decrypt a hash value to get the original string. Since there is not a direct method for decrypting SHA224 hashes, you need alternatives to somehow reverse the hashing process. Best solution for decrypting SHA224 hashes is to use trial and error method, that means you will iterate over possible combinations and try to find the right output that matches with the hash value you are trying to decrypt.

While decoding SHA224 hashes, you can use 2 different approaches which are similar, but have some differences.

In the image below, you can see how SHA224 encoder decoder works. Even though the length of the inputs is very different, the output length is the same for both strings. 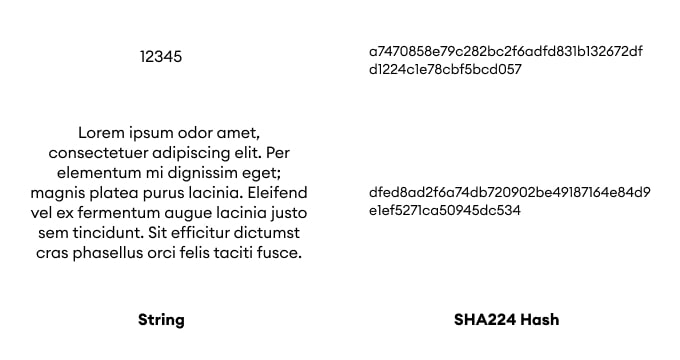 It is advised to use common password list first if you want to decrypt a has first. For other cases, it is possible to decrypt it for short strings, but again, you must make the settings properly.

How to use Online SHA224 Encrypt/Decrypt?

For encode or decode SHA224, you can use the following guide: