You can see the shadows both on iOS and Android emulators below as a comparison. Styles are created with "Online React Native Shadow Generator" in the following example for the value 6 for depth. You can see that both shadows looks very similar to each other. 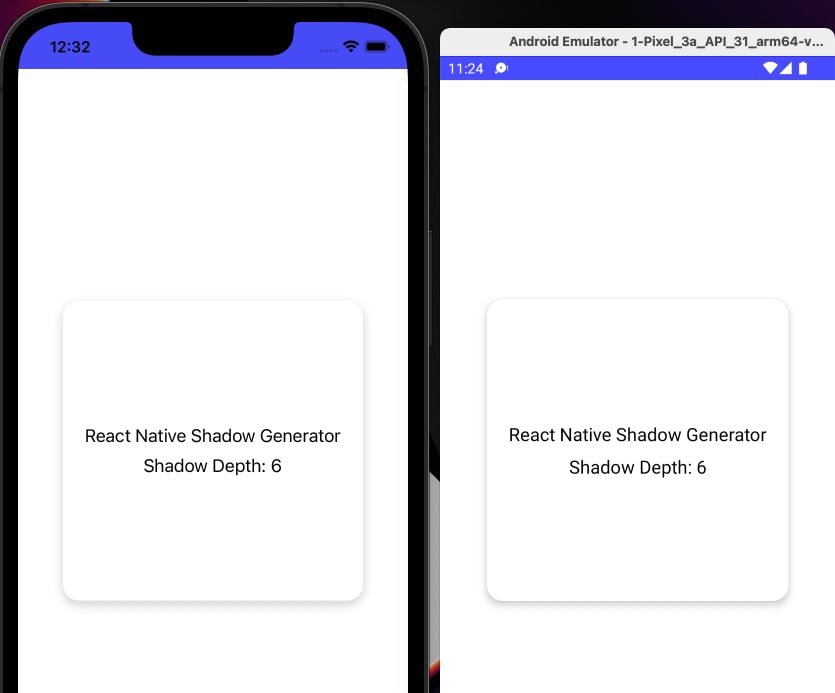 While generating styles, there are some properties used for both platform like shadowColor, on the other side, there are platform specific ones like shadowOffset, shadowOpacity, shadowRadius for iOS and elevation for Android. Also, shadowColor is only available on Android for API 28 and above. Also, keep in mind that, if the background color of the box you want to apply shadow has an alpha value, it effects the result both in iOS and Android in a different way. If the opacity of the box is zero, the shadow is not visible on iOS, whereas its display will change on Android. So, for consistency, it is adviced to apply it to boxes which have solid background colors.

In Android, there are very few parameters to control shadow. So, it is preferred to mimic Android shadow by adjusting parameters related with iOS. In Android, the opacity of the background color decrease more and more when you increase the depth or elevation. So, it is recommended to keep opacity low for higher offset hight values of shadow in iOS. Also, horizontal offset is not available in Android. So, it is recommended to keep horizontal offset as 0 in iOS.

For getting more info about how to control shadows in your mobile applications, you should make trials on React Native emulators and see how each property affects each other. Also should check the Shadow Props page on React Native documents.

Don't forget that you can use different shadows for each platform bu tuning platform-specif params like offset, opacity, radius, and elevation. Main aim of this tool is to create shadow styles which will be displayed similarly in both platform.

How to use Online React Native Shadow Generator?

You can generate React Native shadow styles by following the guide below.